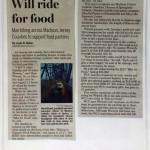 It’s steamy hot outside, but a determined Quincy executive is pedaling dozens of miles this week on Madison-Jersey counties’ bike trails and roads to raise money for food pantries.

“I did 71 miles Sunday, and 70 miles Monday,” said Mark Wiewel, 56, on Monday night after he had logged 5.5 hours of riding his recumbent bicycle.

While he rides for enjoyment, the president and chief executive officer of Western Catholic Union of Quincy is motivated to pedal even further by his desire to help others in his yearly, “Bike for Food” charity ride.

His mission is printed on the large clear shield on the front of his bike: “Biking to Support Food Pantries,” and James 2: 13-17. The Bible verse admonishes people to feed and clothe the needy.

“I thought if I could do it for a cause, it would be cool,” he said.

He also has ridden his bicycle in diabetes organizations’ fundraisers, the length of Illinois and across Iowa.

Wiewel guessed with Tuesday’s predicted mid-90s temperatures he would ride the bicycle about 65 miles. He had hoped to get an earlier, 6 a.m. start to get a jump on the heat.

Despite cooler temperatures in the weather forecast, Wiewel may face rain this week in his ninth annual charity ride. No matter, Wiewel’s goal is to ride 450 miles from Sunday July 20 through Saturday July 26.

“Four-hundred-fifty miles would be the most I’ve done in seven days,” he said. “Each year it gets a little bigger,” he said of his mileage, and amounts of money he raises.

WCU matches donations of cash, checks and value of food or personal hygiene items up to $500 per selected pantry, racking up $135,000 to give away from 2006-13.  The money, from public donations and WCU matching gifts, has gone to 15 pantries.

Thath money represents 18,000 miles of bike riding for Wiewel. He is the only person from WCU who rides in “Bike for Food.”

WCU pays Wiewel’s ride expenses, so all donations he generates for the pantries go to those organizations and then donors may claim tax deductions. Although Wiewel’s ride lasts one week, the WCU matching period lasts the full calendar year.

It was coincidental, though, that Wiewel ended up crusing the vast bicycle trail system and nearby roads in Southern Illinois.

Wiewel had planned to ride across Iowa in the RAGBRAI XLII (Register’s Annual Great Bicycle Ride Across Iowa) this week to benefit other pantries. His wife, Karen, 51, though, needed to undergo treatment for cancer at St. Louis University Hospital.

Wiewel canceled his Iowa plans, made telephone calls to locate pantries in Madison County and relocated his 2014 “Bike for Food” ride.

“I want to be close to her,” he said of his wife. “I dedicated my ride this year to her.”

Two of Wiewel’s sons, Matthew, 20, and Mark Patrick, 17, alternate riding with their father. A third son also came to the area. The couple also has two daughters.

Early this week Wiewel rode from Collinsville to Pontoon Beach, Granite City, then east to Edwardsville and Troy, then back west to Glen Carbon, Maryville and across the Chain of Rocks Bridge over the Mississippi River. He got a bit lost and ended up near the area’s refineries.

He also fell off his bike in Collinsville.

He planned to ride up to the Alton area and Great River Road on Thursday.

“You have great bike trails up here,” he said.

He said nearly all drivers of motorized vehicles are “friendly and courteous.” Weiwel bought his more comfortable recumbent bike in 2006 that he dubs “the recliner on wheels” after suffering severe blisters during a 2005 ride on a regular two-wheeled bicycle.  The blisters cut short his ride, landing him on bed rest.

Regardless of the bike, Susie Harris, area director of Madison County Catholic Charities, said the organization is happy Wiewel is trying to raise money for it’s pantry.

“Madison County Catholic Charities greatly appreciates Mark’s efforts on behalf of the people we serve,” Harris said. “He is going above and beyond to assist us in our mission despite the difficult circumstances he and his family are facing.  It is inspiring to see someone take the time, effort and determination to complete a challenging task on behalf of others. We are humbled by and grateful for his efforts.  This time of year is always difficult for food pantries, the demand has increased and all pantries are trying to meet those needs.  We feel fortunate to have the support of the community and people like Mark that remember that there are people among us that are doing without.”

In order to help pantries obtain the WCU match, donors should write “BIKE” on their checks or other items they provide. They should mail or take the donations to the centers, not to WCU.

Online links to the organizations with donation addresses are: http://www.cc.dio.org/home.htm, for Catholic Charities; http://glenedpantry.org/home, Glen-Ed Pantry; and http://fbmaryville.org/maryville-outreach-center, for Maryville Outreach Center at First Baptist Church of Maryville.

WCU is a fraternal life insurance society based in Quincy and founded in 1877. (http://www.wculife.com).