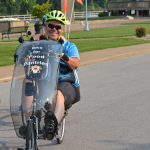 ALTON — A man who rode his bike throughout Madison and Jersey counties last July to raise money for food pantries soon will be pedaling across Iowa to once again help others.

This ride will have even more special meaning, as all of Wiewel’s five children will ride with him to honor their mother — his wife Karen — who died Jan. 10 after battling cancer for six years.

“Food pantries globally, nationally and locally are in desperate need of help,” said Wiewel, of Quincy. “This fundraiser hopes to address the local need, as well as bring attention to the growing problem.”

People can support Wiewel’s local “Bike for Food” effort by sending a check with “BIKE” written on the memo line, or bring cash, food, toiletry or school supply donations to Catholic Charities, 3512 McArthur Blvd., Alton, from 8:30 a.m. to 4:30 p.m. Monday through Friday. The donations must have a note attached that says, “BIKE,” in order to qualify for an up to $500 donation from Western Catholic Union.

“We are tracking how much we collect and he is going to match it,” said Denise Brown, Madison County Catholic Charities area director. “It is neat his kids all are going to be riding with him. We like the concept. People always think of food pantries always needing canned goods and non-perishables, but we give out toiletries,” toilet paper and personal care items.

Wiewel is president and chief executive officer of Western Catholic Union, a fraternal life insurance society based in Quincy and founded in 1877.

This year marks the 10th time Wiewel, 57, has ridden long distances to raise money for pantries, totaling $203,000 for 16 recipients over the years. He rode in the Jersey-Madison counties area in July 2014 because Karen Wiewel was being treated for cancer at St. Louis University Hospital. He also dedicated his ride to her. Two of Wiewel’s sons alternated riding with their father last year, and the third son came to St. Louis in support of his parents.

The forthcoming, approximate 500-mile ride will be part of the Register’s Annual Great Bicycle Ride Across Iowa, beginning July 19 in Sioux City along the Missouri River on the western boundary. The ride culminates July 25 in Davenport, at east end of the state by the Mississippi River.

Wiewel rides his more comfortable, recumbent bike he bought in 2006 that he dubs “the recliner on wheels” after suffering severe blisters during a 2005 ride on a regular two-wheeled bicycle. The blisters cut short his ride, landing him on bed rest. His mission is printed on the large clear shield on the front of the bike: “Biking to Support Food Pantries,” and James 2: 13-17. The Bible verse admonishes people to feed and clothe the needy.

“I thought if I could do it for a cause, it would be cool,” he said last July of his bike rides.

He also has ridden his bicycle in diabetes organizations’ fundraisers, the length of Illinois and across Iowa.

WCU pays Wiewel’s ride expenses, so all donations he generates for the pantries go to those organizations and then donors may claim tax deductions. Although Wiewel’s ride lasts one week, the WCU matching period lasts the full calendar year.